Eat Your Saturated Fats… They’re Good For You.

Published recently in the Washington Post was an article about the U.S. government’s decision to remove cholesterol-lowering recommendations from its dietary guidelines. This decision, different from the nutrition advisory panel’s forty year caution, is based on the finding cholesterol doesn’t increasing risk for heart disease, nor affects level of blood cholesterol. It is assumed foods with cholesterol however is migrated with high levels of saturated fat, and that remains a risk factor according to the advisory panel.

For a sudden move, it’s worth wondering how the government could be wrong in its position for such a length of time. From the Washingtonpost article, “As late as 2013, a task force arranged by the American College of Cardiology and the American Heart Association looked at the dietary cholesterol studies. The group found that there was ‘insufficient evidence’ to make a recommendation”. It was previously advised cholesterol is to be consumed below 300mg per day to evade heart disease risk. Worrying about the amount of eggs you consume is a thing of the past thanks to the new recommendations. In addition to the recent review of dietary cholesterol studies, there are some key periods of history hinting the erroneousness of cholesterol recommendations.

In the early 20th century, a Russian scientist, Nikolai Anitschkov, examined the effects of cholesterol-laden food in rabbits. He and his colleagues discovered cholesterol increases atherosclerosis progression and the subjects are likely to experience mortality. In the 1940s, Meeker and Kesten conducted a study examining the effects of soy and casein in rabbits; the casein-fed rabbits, at the end of the study, experienced more atherosclerosis unlike the soy-fed rabbits. These scientists thought there was something crucial in their observations, however there were two problems: 1) the timescale for rabbits in the feeding studies is inconsistent with the timescale of atherosclerosis in humans, and 2) there are no human trials conducted to confirm the hypotheses of these scientists. While atherosclerosis requires the presence of cholesterol, it’s important to understand what causes the sterol to stick to the arterial walls. It is presumed saturated fat causes the sterol to stick. 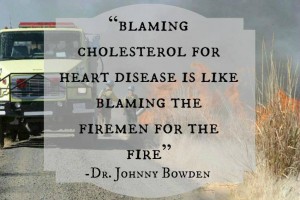 In the 1950s, a scientist named Ancel Keys published a study to show a positive relationship between saturated fat and coronary heart disease known as the Seven Countries Study. Correlation isn’t causation however; there’s probability regions consuming foods high in saturated fat experienced no increase of heart disease such as the Masai and present-day France and Luxembourgh. In the United States, the consumption of carbohydrates sharply rose as consumption of saturated fat declined in the past forty years. Because carbohydrates migrated with dietary fat (particularly saturated fat), it’s again hard to separate various co-founding variables and establish causality.

George V. Mann M.D. published a study examining cardiovascular disease risk in the Masai, and discovered the population eating foods high in saturated fat experienced little to no increase risk. It is thought this study would be an appropriate counter to Keys’s study, however it imminently became endorsed by the scientific community. If Key’s hypothesis becomes wrong, it would mean the nutritional health field became stifled as decades of useful research was tossed aside, and people adopting Key’s advice faced and are currently facing compromises on their health (particularly those prescribed cholesterol-lowering drugs).

So where are we now? Repealing cholesterol recommendations is the step in the right direction. Probably more research should be conducted on cholesterol despite the repeal to bring further understanding for both doctors and the public. With the repeal of cholesterol recommendations, scientists can focus on conducting studies examining the effect of foods high in saturated fatty acids, particularly cheeses and coconut oil. This whole decades-long debate on fat is all about confirming the evidence of Ancel Keys; it’s far from over and there’s still much to be done.

Thanks for that Kevin. It is heartening to know (see the pun lol) that the government is starting to understand and make some change in this area.