Wool is Ethical: A Tirade 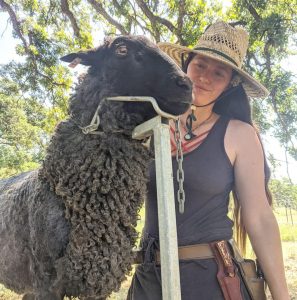 Wool is mostly atmospheric carbon. Sheep are a pure grazier- my sheep eat zero grain or anything that could be in a human food supply. They are eating, fermenting, pooping, peeing and stomping on the grass and keeping it from drying out and chemically oxidizing, (releasing greenhouse gases) and instead opening the thatch for native grasses, nesting birds and ground dwelling insects like native bees, and increasing organic decomposition.

This ram is part of a group that is grazing a fire break on an established Cal-fire line on land that has burned 4/5 years. They are target grazing thistles in addition to native grasses. This valley is home to restoration projects including tree replanting which we mulch with the off cuts of fleece, and bird boxes which get a handful of belly wool when they’re installed. The top wool comes inside where it is washed, and then either felted or spun. I can do all of that here with simple wooden tools. No tillage is required. I shear by hand without wrestling them on the ground or cutting them.

So my question is–what is your alternative fibre? Because all I see in the realm of vegan textiles is tillage and petroleum.

Cotton is one of the dirtiest crops on the planet in terms of poison use, and a heavy feeder. Bamboo comes from the southern hemisphere and takes massive processing to become a textile. Linen and hemp require annual tillage and flax is harvested with a pulling machine, destroying soil aggregates.

Synthetic fibres are made from petroleum which kills ecosystems, poisons people, disrupts endocrine systems, and fills the ocean with microplastic.

How many wildfires have our stretchy yoga pants prevented? How much has the soil microbiome been nurtured by our cotton? How does a bamboo textile mill increase biodiversity and human health?

Also, the ocean called. It’s really tired of the micro-plastic washing out of our fake-ass clothes. It’s outnumbering plankton and threatening one of the biggest and most essential parts of our world that will kill all of us if it stops absorbing and instead begins emitting greenhouse gases. We’re on the way to that tipping point.

Humans have been using wool for at minimum 10,000 years, though a recent find of a MUCH older wool yarn is calling that estimate out as ridiculously low. In all that time, wool has never had a fraction of the destructive impacts as cotton or microplastic shedding synthetics.

Most sheep don’t shed naturally. They need humans like me to shear them twice per year. If my way of life dies out, so do they.

Let’s also address methane, a common issue raised with livestock. Methane on pasture is a food source for methanotrophic bacteria. It almost all gets reabsorbed. You also have to factor in the GHG release *avoided* by grazing down grass instead of leaving it to stand and dry out, releasing it’s nutrients into the air. Rice farming is a major emitter of methane without the benefits of grazing, and I have literally never heard anyone raise it as an ethical issue, so stop w the hysteria about farting and burping animals.

We can keep doing what we are doing here for literally tens of thousands of years, we can see a world without end from here- just waves of grass rising up and grazing down like deep breaths.

Modern textiles have poisoned the soil, enslaved people, and contributed to climate change in a relative blink of time.

We can start to heal this legacy; this continent used to support many many times more large grazing animals during the Pleistocene- and we had an ice age so it certainly didn’t cause warming!

Grow grass not crops. Wear wool not plastic. There is a more complex world waiting to be in relationship with you.