One of the main things people criticize us for with regards to our choice to eat meat is that is is not environmentally friendly. USUALLY they are just lumping us in with factory farms because to take a pragmatic look at our diet would tip their world on its ear. ANYHOW some amazing news for our movement is that Allan Savory and his Savory Institute is a finalist in a highly coveted competition called “Virgin Earth Challenge” and whether he actually wins is not important.. HE IS A FINALIST!!! and that say volumes for what we here at EOM believe in and that is that… herbivore agriculture and Holistic Grassland Management can heal the land.  See his Mr. Savory’s amazing TED Talk here: How to Fight Desertification and Fight Climate Change 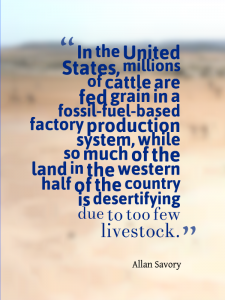 “THE PRIZE
Sir Richard Branson’s Virgin Earth Challenge is an innovation incentive designed to award scalable and sustainable ways of removing greenhouse gases from the atmosphere.

Launched in 2007 by Sir Richard Branson and his 5 fellow Judges, a challenge was laid down to the world to come up with ways of demonstrating ‘greenhouse gas removal’ activities that can take more greenhouse gases out of the air than they emit.

To show how seriously this notion is being considered, one of the biggest science and innovation prizes in history, the $25m Virgin Earth Prize, is offered as a reward.

It’s not an easy prize to win and our rules are accordingly demanding, but the potential benefits to the world are clear. A process capable of taking greenhouse gases out of the air, and keeping them out, on a meaningful scale would be a valuable tool in the battle against climate change.

That’s why we’re very excited about our finalists.

THE FINALISTS
After the stage-gated review of thousands of proposals, we took very deep dives into the leading submissions making use of world-experts from various institutions, business sectors and universities.

This feedback was collated by the VEC team, and we found that nothing yet sufficiently met enough of the criteria to be put to a final judgement. However… we did identify a handful entries that were clearly a cut above the rest. Entries that showed a strong chance of being able to get to a winning point as they move forward.”
Read more here: Virgin Earth Challenge