How to Win an Argument with a Nutritionist or Dietitian.

I now work for a Natural Food Store that is privately owned and an integrity based pillar of my community, not to mention a natural food landmark in my city since the 1970’s. While living in Vancouver I was a front end supervisor for a large grocery chain which was mostly a icky dichotomy in my life as a sustainability blogger.  What made matters worse was my beloved whole foods market once called Capers on Robson street sold out to Whole Foods so even that experience was less than ideal. When I moved back to my home province of Alberta this summer I was overjoyed to find my current employer that I was once a faithful customer of, was not only still in operation but had expanded! I was thrilled to go from loathing most I sold by day.. and blogging about how much I loathed it by night to aligning myself perfectly with my food ethics. I won’t go in to what else this company (to be named at a later date) stands for… that is a WHOLE (pun intended) other blog.

My new job is to engage with customers on topics of health and nutrition and while I LOVE my new work role it does come with its challenges. Health and well being has such a infinite range of meanings and variables that even though I began to loath my other job… it was pretty black and white in comparison. You might think think people coming into a store trying to get well or maintain health would be easy but imagine a common scenario of the infrequent shopper that comes in because of the latest “Doctor” Oz show and MUST HAVE his latest poorly researched, out of context, miracle supplement that is guaranteed to change their life or at least their dress size forever (translation..til the next show).

Which brings me to another tricky scenario and the topic of this blog….They come in because their girlfriend or Mother in law, etc, etc. is a REGISTERED nutritionist or dietitian. You know those people who make the delicious and nutritious hospital food and/or won’t/can’t truly educate themselves in current human health research.  NOT to say MANY don’t  use this certificate as it should be used.. to pacify the mainstream health industry as they launch pad to greater career goals and further education and a lifelong commitment to uncovering the multifaceted path to wellness. In this critique I am talking about the traditionally (under) trained who fervently, blindly stick to these antiquated, immalleable, mainstream theories as if to religious dogma. NOT to mention the unmentionable.. but I’ll mention it anyway. Dietetics associations are very much in bed with Monsanto and the big PharmaCorps, so they very much toe the ‘biotech is good for you’ and other discarded nutrition lies.

Helping people that come in believing that a REGISTERED heath practitioner’s word s golden because it is backed up by our health care system can be some of the most maddening land mines to maneuver through.. ESPECIALLY with all the legal restrictions surrounding what I am ABLE to say as a mere nutritional consultant in a health food store.  One poor fellow (sadly true story) came in asking for DIET BREAD. When I asked him his criteria for said diet bread he said it must be low fat! I then asked him if he was cutting out some carbs to which he explained that bread was the only thing that filled him up on the diet his VEGAN, nutritionist girlfriend put him on, which was a low fat, no meat diet. For WEIGHT LOSS.. no LESS.. “pun AGAIN intended” for which this mysterious “diet bread” in abundance was A-OK.LOL. He then asked me were the Pea protein was… sigh…. feeling my pain yet?

I surely hope some of these poor souls make it to this blog and read some of the stellar advice in the links below. Now while I may not agree with everything in these shared posts.. they are well written and researched and both very good starts to wading through the ridiculous to dangerous REGISTERED PROFESSIONAL advice out there. Please dear people.. if you have a serious condition see a SPECIALIST in the field of your condition and/or a Professional CERTIFIED Naturopath.

In the meantime.. enjoy!:

How to Win an Argument With a Nutritionist or Registered Dietitian

How to Win an Argument With a Nutritionist 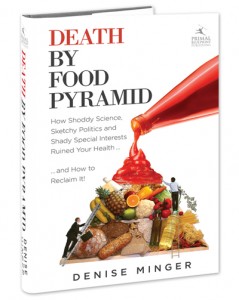 I would also STRONGLY suggest reading the remarkable book DEATH BY FOOD PYRAMID by former raw vegan and debunker of “The China Study” Denise Minger of Raw Food SOS who just celebrated her 10th year anniversary as an omnivore!

I’m really sorry (for me mostly) that I didn’t read this when it was posted a year ago. I just downloaded Death by Food Pyramid from Kindle ($9.99) and can’t wait to start reading it. Aside from EOM, Authority Nutrition is the only other site I put my trust in. Thanks for a great article Lana.