This is the second entry in our series ‘Curious Case of the Vegan War on Regenerative Ag’. In this entry, we will be discussing the rather infamous (for all the wrong reasons) vegan Joey Carbstrong. There is so much wrong with this individual’s message that it’s near impossible to single out just one. It’s also difficult to find one attack on Regenerative Agriculture without mentioning his many other attacks on logic and common sense and decency. But, I will give it my best attempt.

Like many vegans, Joey not only fails to look at his own ethical consumption but in fact vigorously defends his industrial monoculture reliance. And like most vegans, he not only defends his abysmal agricultural choices but he chooses to call the monumental, unnecessary, wasteful death on his plate “accidental and incidental.” There is never any humble reverence for the many animals that die horribly for his unsustainable fad diet.

Here is a video of his insipid, repugnant guilts-plaining.

This video, in particular, is hilarious in its ignorance because he attempts to, and fails miserably at, blaming all farm animals for eating plants. He also goes so far as to deny that any Pigs, Chickens or Cows are ever finished on pasture. Clearly, he’s never even attempted to visit a pasture-based operation. Why would he, though? One singular pasture-based operation would end his feeble, hysterical argument in its tracks.

You see, I really don’t understand why Joey has such a big problem with farm animals eating plants, including over 86% of what we won’t even eat (this coming from the FAO). I also don’t think Joey understands what “grazing” means. To him, all plants are being mechanically harvested to feed cows kept in a barn. Does he not know that cows have legs and can be herded and moved around? From the way he talks, it doesn’t sound like it. 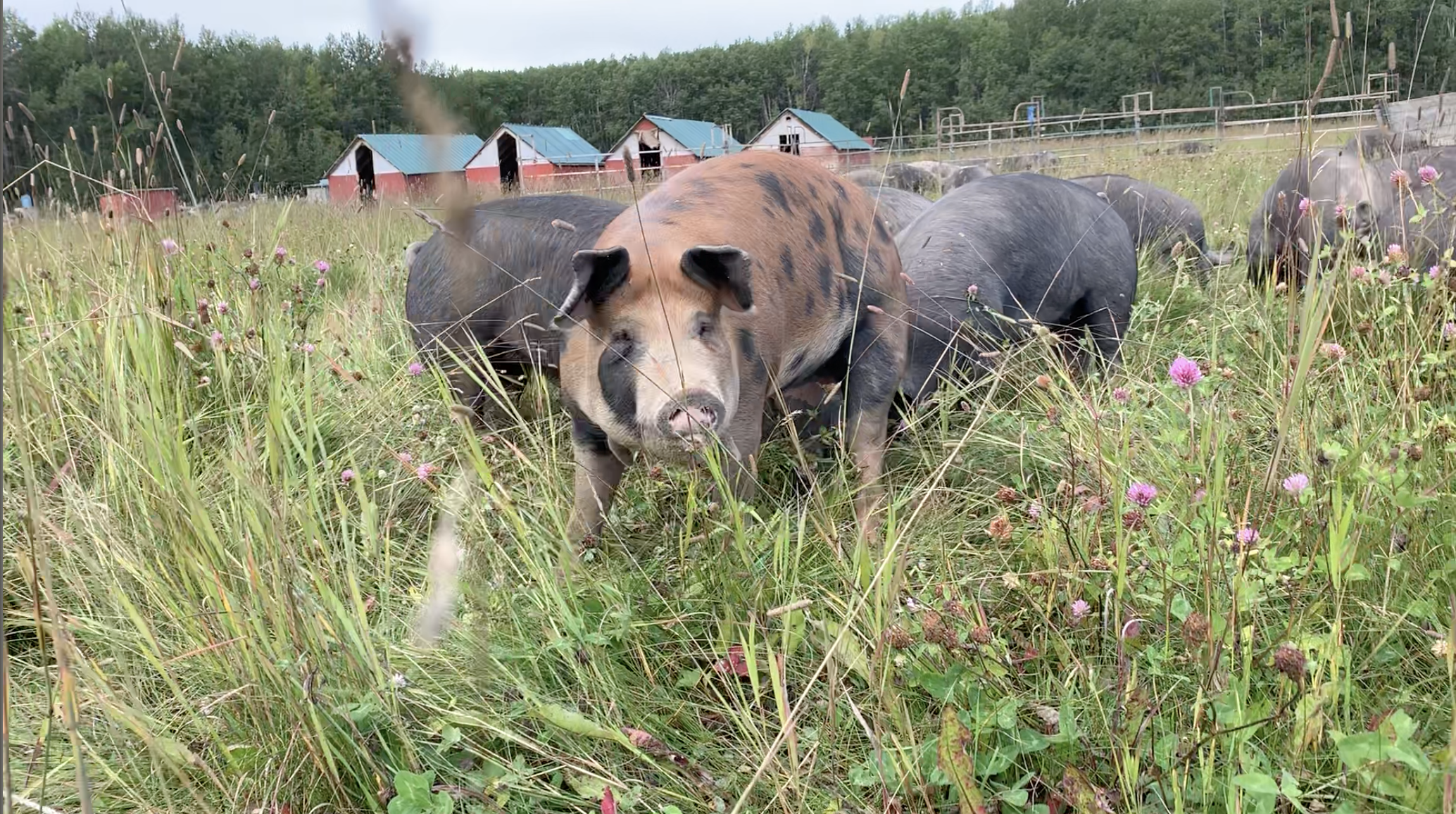 Pastured pigs are growing in popularity, so his assertion that pasturing pigs don’t exist is irrelevant and a lie. I can give proof that pastured pigs exist, and is one of a growing number of farms that are taking this on, such as the photo on the left.

Grain is grown in the rainforest to feed chickens? Nope, most grains fed to chickens are grown domestically, usually within 100 miles of most farms. Also, since pasture-raised chickens also are a growing enterprise on more and more farms, a lot of them are fed less grain but more food scraps; plus they get local bugs, mice, and other critters they can latch their beaks onto. No doubt Joey’s dead wrong about his assertions. 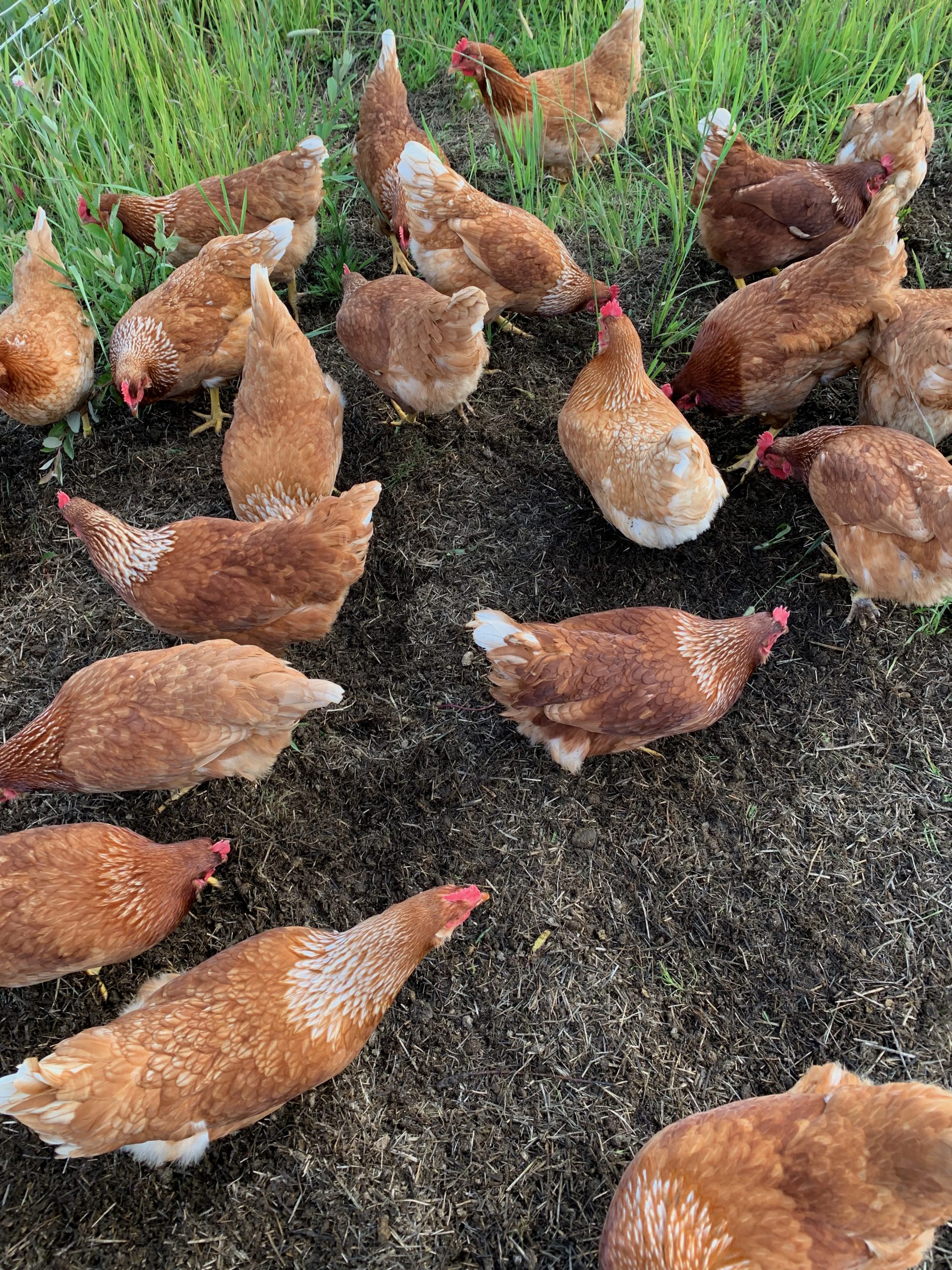 His exploitation argument is also irrelevant, especially if you think about how we also exploit plants to eat their offspring–tofu is made from the seeds of soybean plants, which would otherwise grow into a new soybean plant if we didn’t decide to “murder” said seed and render it into food.

That said, we’re not the only species on this earth who exploit other animals for our species’ seemingly-selfish benefits. Ants exploit aphids to eat and harvest “milk” from. Bears exploit salmon to feed themselves. Cowbirds exploit other birds’ nests so they can lay their eggs and have those particular birds raise their offspring for them. I could go on. Carbstrong acts like we humans are the only species on this earth who exploits animals, which couldn’t be further from the truth.

My favourite part of the video, though, was when he attempted to “debunk” grass-fed. He tried hard to sound like he knew what he was talking about, but sadly, for him at least, fell quite short. Grazing ruminant herbivores have four legs and cloven hoofs and the muscle power and herding instincts to move together as a mob when prompted to. They are extremely and amazingly capable of being flexible at “harvesting” a wide variety of grasses, forbs, and even some shrubs and trees if need be. Combined with all these superhero powers, plus our big brains to figure out grazing schedules and maps, they are moved on to the next area that needs their attention. Grazing ruminants don’t need the vast amount of infrastructure that is required for a feedlot operation. One person barely even needs a motorized vehicle, let alone fencing, if they’ve got the animals–and themselves–trained to low-stress handling and to daily (or hourly) moves. Grazing livestock doesn’t cause nearly the crop deaths as mechanical harvesting of perennial crops, nor the mechanical tillage, seeding, spraying, and harvesting of annual crops.

Not only that, but grazing domesticated ruminants have proved, beyond a shadow of a doubt, the ecological benefits they give in providing wildlife habitat for innumerable numbers of species of songbirds, burrowing mammals, cervids, insects, arthropods, and various predators, including wolves. One film I watched recently that touched on how farmers and ranchers have been able to raise sheep while wolf packs are constantly living around them; these shepherds basically run their animals while keeping wolves around in the area. It was a documentary (you can find it on YouTube) called “Lords of Nature.” I highly recommend it.

He also states that animals killed for his inferior Carb“strong” diet aren’t exploited because they are wild and can run away! But they don’t run away, Joey! Have you ever gotten yourself stuck in the middle of a 1,000-acre cornfield with harvest machines rumbling somewhere near you? Do you know where they are so that you can figure out where you can run away to get away from them? Does the guy operating the harvester know where you are? No, of course not. Putting you in this scenario shows you what it’s like to be a field mouse at harvest time. You have no clue where the machine is because it sounds like it’s all around you. Then all of a sudden it’s on top of you and it’s too late to run away. 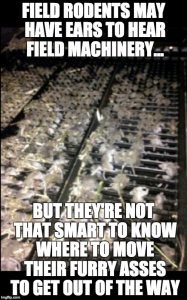 This is a photo (made into a meme) of the inside of a combine-harvester from a farm in Manitoba that was harvesting wheat. Do you see all that white stuff in the photo? Good. Those are thousands of dead mice. So please, enlighten me again with your immense agricultural expertise as to how field mice, among other animals, are capable of “running away” when crops are grown and harvested for your vegan palate.

Fact: industrial monoculture kills on average 25 times more animals than pasture-based animal agriculture. Put that in your pipe and smoke it!

It’s also common for vegans like Joey to dismiss anima deaths caused by crops, particularly grains and sugar, by claiming that they are “accidental” or “unintentional”. Maybe it’s when it comes to the animals being torn to shreds, crushed to death or caught up by machinery while tilling or harvesting fields; or perhaps when they’re being scorched alive whilst a farmer is burning fields, or being vacuumed up (birds in particular) while harvesting olives or cherries. But I take issue with this asinine argument when it comes to protecting both the crop and the harvest against billions of animals that aren’t considered cute, but vermin instead.

Here are just some of the methods used:

If I killed as wantonly, cruelly, destructively and wastefully (and unknowingly) as a vegan, I would quit eating. Vegans are terrible people who do nothing but further their cult and Joey is at the top of the list of horrible vegans. To hell with human health, be damned the animals and screw the planet. Go cult vegan! 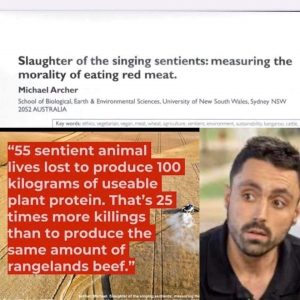 Here are a few more articles on this so-called “accidental” mass-slaughter of wildlife; or rather, on Joey’s “accidental” diet-for-the-incurably-stupid.

The Slaughter of Singing Sentients; Measuring the Morality of Eating Red Meat

Ordering the Vegetarian Meal? There’s More Blood on Your Hands

Does a Vegetarian Diet Really Result in Fewer DeathsThan an Omnivore One?

How Many Die for Your Food: Calculating the Death Toll of Crop Production vs. Livestock Production

Meet Pesticides, the Silent Bird Killers That Protect Our Crops 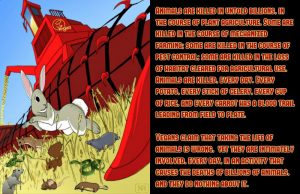 It gets far more ludicrous than just the denial of one’s own death toll.  Joey, to justify his own killing, moves on to cannibalism and pet eating. He figures that’s comparable to his mass slaughter of wildlife for monoculture. I think the crying child was a nice touch. Who gives a damn about innocent, sentient human babies when you can make money ‘exploiting’ human emotion? All to pretend to save bovine- and bunny-babies?

Another charming attribute of our friend Joey is this activism STYLE. He is a blitz attacker who likes to catch people completely off guard and present them with unwinnable, rhetorical commentary. When presented with his own flawed rationale on crop deaths, or regenerative animal agriculture choice,  he simply defaults to desperate rhetoric: “But, but, but, murder! Rape!! Exploitation and slavery!! Excretions!!”

Even when he was invited to have a civil debate (operative word being civil) with a classy, calm, intelligent female hunter, as seen in the video below, he swings into a rude, hysterical, irrational bully. Where’s the civility, Joey? I thought vegans were supposed to be peaceful and compassionate? Or does that only apply to your own kind?

I wrap this up by seeing how all of Joey’s awesome activism culminates in his so-called “ethical, sustainable, least harm” diet. I find the name Carbstrong to be incredibly ironic in this case. I have seen few meals to be less nutritious, less environmentally sustainable and more absolutely cruel, wasteful and harmful to the animals.

That concludes our segment on Joey Carbstrong. It’s more time, attention, and dedication than he deserves from our fine community. Yet, showing how he completely backfires in every aspect of this diabolically flawed ideology called “veganism” is a necessary evil we have to endure.

Please share far and wide to end the ignorance and stupidity.

There is so much biased bullshit in that article I dont even know where to begin. Scientists have refuted regenerative farming vigorously. Scientists have also widely confirmed veganism is the only significant way to heal the planet. Vegans are supportive of veganistic farming ,which is beginning to flourish. Lana Joe Salant is a vicious ,nasty little women who talks of ethics whilst supporting the breeding of genetically bred dogs that suffer, there entire lives from airways that are so compromised they struggle daily to maintain enough oxygen. Exercise is torment for them. Lana your movement is a farce.

I love vegan cry babies. How about you tell me what SCIENTISTS exactly have debunked Regenerative Agriculture. In the meantime how about you use your own words and tell me what part of the science in our article here you don’t agree with. https://www.ethicalomnivore.org/regenerative-agriculture-works-a-compilation-of-evidence/ You know what the farce is? The cult of vegan that in 70 years hasn’t shut down one single factory farm. The other farce is that 100% of vegans return to meat eating and because none of you nincompoops support sustainable agriculture as vegan the meat you will return to as meat eaters will ironically be factory farmed meat. Now run along and have yourself a good cry and thanks for stopping by to be stupid.