Modern humans evolved from a common ancestor we share with chimpanzees, who was mainly herbivorous (eating plants and fruit).

As far as we can tell, early humans ate meat and animal products. Evidence of eating meat goes back as far as any records we have of human existence, but it cannot tell us how frequently or how much meat was eaten.

Animals and hunting are clearly the major theme of the oldest human art, which suggests these activities were an important part of the life of early man.

And the oldest artefacts show that humans made tools and weapons to help us hunt prey and remove food. Fossilised baboon skulls dated at almost 3 million years old show evidence that they had been fractured to allow the brain to be removed. 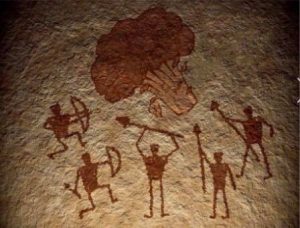 Source unknown. If you are the owner of this image, please let us know.

There is a good argument that claims we were able to grow such large brains (which require a lot of calories, using 20% of our bodies’ energy) thanks to the abundant energy found in meat, animal fat, and offal (including the brains and bone marrow of prey).

A diet rich in animal products has enabled humans to have shorter intestines and smaller livers, both of which are high energy users, meaning more energy is available for brainpower.

It is probable that the earliest humanoids started accessing large amounts of meat by scavenging or chasing off predators. Over time, we developed ways to hunt and trap our own prey.

How Can Humans be Meat-Eaters Without Large Canine Teeth & Claws?

The simple answer is that, as we evolved larger brains, we were able to create tools and weapons to help us retrieve meat, and also to harness fire to help us cook meat, which can release more energy and nutrients. So we did not need the physiological weaponry other omnivores have, such as bears and dogs.

We can see further evidence to the case that modern humans are natural omnivores from the fact that there are several nutrients essential for humans to be in full health that are only easily obtainable from a diet that includes meat and/or animal products.

B12 (cobalamin) is used by every single cell in our bodies, and particularly important for the nervous system. It is created either by the activity of microorganisms (certain bacteria and archea).

Many animals have these microorganisms in their guts, because they can be found in the soils where those animals graze, and so they are able to synthesise B12 from their food. Humans, however, do not, and so we must either eat products from animals that do (including meat, fish, milk, and eggs), or get it from other sources such as yeast extract or certain seaweed or algae.

DHA is an essential omega-3 fatty acid, required for brain development and function. It is found in oily fish such as salmon and some algae.

Some meats such as beef contain much smaller amounts, and 100% grass-fed beef typically contains twice as much as grain-finished beef.

While the body is able to make some of the DHA it needs from ALA (another omega-3 fatty acid), the process is inefficient, so it is hard to get from plants alone.

The foods we eat can contain iron in various different forms, but they have very different properties. Heme-iron is a form that is only found in meat (mainly red meat).

The body absorbs heme-iron particularly easily, and it also helps the body to absorb other forms of iron more easily, such as the iron found in spinach and other iron-rich plant foods.

Some plants (such as grains and beans) contain antinutrients that can interrupt the absorption of iron, however heme-iron is unaffected by this process.

Creatine is a compound that helps the cells in your body get energy and also helps build muscle.

The best sources of creatine are meat and fish. The body is able to produce a tiny amount of creatine on its own, but not enough for those with an active lifestyle.

Vitamin D is an essential nutrient that helps bones use calcium. It can be sourced from meat, although our skin can also make Vitamin D when exposed to sunlight.