I run a meat business but I’m glad more people are becoming vegan; here’s why.

I listened to George Monbiot’s debate on why we should get rid of meat today (see below) and at the end thought; “You know what – I agree with him!” (Well with some of it anyway!)

The bits I don’t agree with are covered beautifully in this response.

In fact, many of the points he made I have mirrored in the recent course we’ve launched which addresses how food choices influence our environment.

Unless we do something drastic, and soon, about the way we produce food, we’re facing not only a humanitarian crisis of unparalleled severity, but an unrecoverable ecological breakdown with consequences I find hard to even ponder upon.

I think it’s fair to say it’s not looking good for our kids.

In the past I’ve passionately defended eating the ‘right’ meat; debunking the often-ridiculous claims made by the militant vegan activists in their fake documentaries. Unfortunately, my nuanced defence is often then used as a mental permission slip to continue ‘business as usual’ for many moderate to bad farmers and apathetic supermarket shoppers who like bacon butties for breakfast, ham sandwiches for lunch and cheap chicken for dinner!

Well I am going to say this loud and clear;

If you’re a livestock farmer who isn’t willing to adopt regenerative and ethical techniques to build soil and enhance biodiversity, then I would rather you weren’t in farming.

If cheap factory farmed meat is what you’re buying, then I would rather you were vegan.

Perhaps this is why George Monbiot decided to swing from promoting veganism, to acknowledging there was a case for meat to be included in sustainable food systems, and then back to an even stronger anti-meat agenda within the space of three years.

I think it’s time to step up the game. 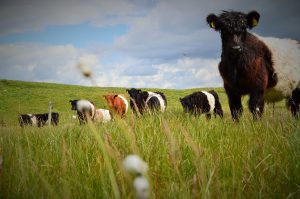 Our meat business Primal Meats  only supports regenerative farmers who genuinely care as much about enhancing the diversity of wildlife on their holdings as producing healthy animals that then go into the human food chain. These farmers consider themselves ecosystem managers that use livestock as a tool for increasing natural complexity and building healthy living soil. The meat from this system is nourishing and healthy, a reflection of the mineral rich earth that grew this food and the impeccable organic welfare standard adopted by these farmers.

The problem; these sorts of farms and farmers are as abundant as rocking horse shit!

From my background in conservation and my experiences as a regenerative agricultural consultant I truly believe moving to this form of producing food is the ONLY way we are going to stand a chance of feeding 9 billion people and avoid creating a planet that’s about as habitable as Mars!

How many people are like us. Fully informed and carefully building a relationship with a handful of small scale organic farmers and growers in order to ensure that our money is voting for a planet that future generations can live on?

The problem; In the context of the western world, there’s, like ten of us!

If we keep categorising ourselves as either ‘vegan’ or ‘omnivore’ we’re going to end up being the mouthpiece and campaigners for the WHOLE omnivore movement.

If you vote for a party based on what your local MP has done rather than the policies of the political party she represents, don’t expect to get lots of people similar in character to your MP running the government when they come to power.

And the vegan movement have – knowingly or unknowingly – got a heavyweight campaign team; chemically based GMO agriculture. ‘Big ag’ and ‘big pharma’ have come up with the perfect way to get compassionate environmentalists unwittingly hooked into their toxic product; artificial meat.

Artificial meat made of soya and other monoculture crop products switches us from being directly in competition with grain fed livestock for food resources, to competing with Frankenstein burgers for land on which to grow our food.

Either way, chemical based, wildlife destroying monoculture production systems are still safe. And when these ‘food’ products have destroyed your health they can offer you a nice cocktail of drugs to fix you up! Good work George.

Grass fed livestock all the while, are happily munching grass on the marginal lands where crops can’t grow anyway!

That’s why movements like Ethical Omnivore and the Wildervore Approach  are so important, we need the nuanced discussions and to understand the distinctions.

In our meat business we have set the bar high and have a strong ethical voice. We only work with farmers who run organic and 100% grass based systems. Our meats are higher in important nutrients and have a better balance of omega fatty acids which makes them anti-inflammatory.

We also promote whole ‘carcass utilisation’ so specialise in all the ‘weird’ bits that happen to be incredibly healing for leaky-gut issues by providing a superb spectrum of amino acids including higher levels of the detoxifying glycine.

The vegan diet of plant foods which inevitably contains high levels of mineral binding, gut destroying anti-nutrients and hormone disrupting soya products is a highly effective way to get a leaky-gut, a process well documented in Lierre Keith’s great book ‘the vegetarian myth’.

As a result, we have a customer base of 70% ex-vegetarian and vegans, who have accidentaly wrecked their gut health, suffer from degenerative bone disorders or are battling with chronic fatigue and an astonishing array of auto-immune diseases.

Because vegans are so passionate about sustainability and welfare, when they do finally realise their diet is not biologically appropriate for human consumption, they wind up on our doorstep. My hope is that a sensible nutritionist or functional medicine practitioner helps them before any irreversible damage has been done.

Veganism is helping our meat business!

So, vegans are on a personal evolution that helps raise awareness of animal welfare issues and helps us in the end. I for one thank them for their compassion and tireless campaigning. The very fact that we have a growing number of people who are interested in veganism is a sure way of knowing our society is growing to a more mature stage of development too. 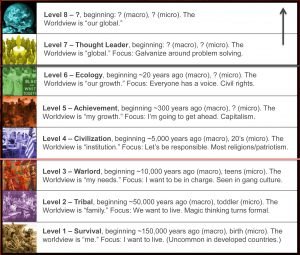 You can see from developmental models such as Clare. W. Graves’ ‘Emergent Cyclic Levels of Existence Theory’ as humans ‘emerge’ we transition through a series of world views and modes of operation, incorporating a little of each as we move on to the next. The study of these stages over the last hundred years is deep and wide-ranging covering thousands of cultures across the world – it holds true in them all. You can’t skip over any, and all societies and individuals start at zero and move upwards as far as their conditions allow.

The ‘green’ stage just before ‘the big leap’ into a more holistic world-view is known by some in this work as the ‘angry vegetarian’ phase of development.

I cover this in more detail HERE.

The good news is that with a bit of luck and help from some supportive and inclusive ethical omnivores we can help people move through this stage and onto a point where they can see that their previously passionate point of view was a partial piece of a bigger puzzle.

Veganism is helping society move from a mechanistic science based perspective where cows are machines and profits are king, to a compassionate and inclusive society where we try and protect the rights of those who cannot fight their own battles.

It’s up to us to take it to the next level.

I very much apreciate the work you do and I was just about to share this article, but what I find problematic in the statement that it’s good to become vegan as a step to move on later, is that a vegan diet not only affects gut health but also mental health. And a vegan diet is just spreading like wildfire among teens – which most evidently let’s the lack of important EFAs create an even greater (and maybe even ireversible) damage. And think of all those vegan parents that raise vegan babies!

Not that I’d believe that regular omnivores follow a healthy diet – almost noone is making broths and avoiding sugar – but the kids at least don’t lack some of the basic nutrients. When I see all these malnourished kids around me I often wonder in what kind of company my child will be living.

Please re read the article … we in no way support the vegan diet with regards to it’s health implications but we do believe for some it is a stepping stone to ultimately becoming an ethical omnivore. There is no denying that some have had great health benefits from short term veganism due to what came before was far worse. We really are the proof in he puddin as so many EOMers including myself (Lana Salant.. founder of EOM) are former vegans.

Thank you for your input and for your encouragement and support. Lana

Humane conditions are a good goal. Eating local food is better. This is what the anti-meat argument ignores. As someone who lives in a wintry land, I can’t eat a healthy diet relying only on local foods. And many of those who live in places with year-round abundance nevertheless select produce from distant lands for nutrition or flavor they desire. As more of us avoid nutrient-dense meat thinking we help some animals, we destroy others in fields and highways and villages where we monocrop. Save a cow, kill a rabbit. We disrupt subsistence economies in other countries (like the quinoa craze) and add to climate change with long-distance shipping. Moving to mostly local meat eating is the best move any of us can do for our own health and the planet’s.

Thank you for this well written piece. Totally agree with a lot of what you are saying. I find lots of vegans are unwilling to listen to the arguments on health as they don’t want to put their health above that of an animal’s. I feel the grass-fed, pasture raised is the best way to be as ethical as we possibly can, eating nose to tail to honour the animal. I will be checking out your website. Thanks again.