Ethical Omnivore: It’s not just about meat (or vegan bashing)… 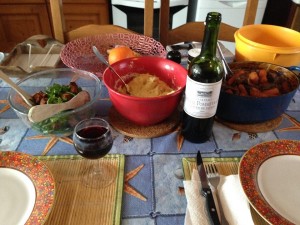 Contrary to what some people may think being an ethical omnivore is not just about vindicating the use and consumption of animal products or bemoaning deluded vegans. It is a far more complex matter with numerous ramifications and a multitude of expressions. I do not pretend to be an expert on the subject. I do not farm. I do not garden. I do not hunt; nor do I raise backyard rabbits and chickens so I will let those more knowledgeable on those subjects address them. But I enjoy eating and preparing food. I am also aware of the disconnect that exists between what is on our plates and what getting it there entails. I try to be — inasmuch as reasonably possible (after all, I am pragmatic not dogmatic) — conscious and aware of the consequences of my food choices. Likewise, I am concerned about my health and want to provide my body with healthful, nutritious foods.

The dictionary defines “ethical” as “involving questions of right and wrong behavior” and “omnivore” as “feeding on both animal and vegetable substances” therefore to mean ethical omnivore is someone who has delved into the implications of what they choose to eat and is fully cognizant of what these choices mean in their totality, at both the personal and global levels.

There is much controversy about what is the optimal human diet but from an anthropological perspective no traditional cultures or people in the world have solely subsisted on plant foods. By “traditional cultures” I do not mean certain religions such as Jainism or Buddhism (although some Buddhists are known to eat meat). The archeological record reveals that since humans and their ancestors first appeared on earth their diet consisted of both plants and animals. Vegan claims that humans are natural herbivores are spurious and not grounded in scientific fact, despite their claims to the contrary.

This being said, ethical omnivores eat and enjoy a wide variety of both plant and animal foods. I cannot speak for others but as far as I am concerned, Michael Pollan’s simple mantra, which he expanded on in Food Rules:[*] “Eat food, not too much, mostly plants” guides my eating behavior. Consequently, when an arrogant vegan assumes that because I consider myself an omnivore I largely ignore the delights of eating plants in favor of animal foods that vegan is dead wrong. 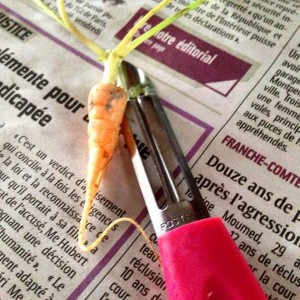 In fact, as an omnivore, I pride myself in eating, as I stated earlier, “a wide variety of both plant and animal foods”. I know for a fact that I eat a wider spectrum of plant foods than some vegans and vegetarians of my acquaintance. And I eat plant foods at every meal! At every single meal I eat a plant food, and the bulk of my meals are comprised of plant foods! Imagine my disappointment when I discovered that “plant-based diet” is merely a euphemism for “plants-exclusively diet”! All this time I thought I was following a plant-based diet…as in “base: main ingredient to which other things are added to make something.”

Today’s Sunday dinner consists of “Boeuf carottes”, a stew made with equal amounts of local pastured beef and locally grown carrots sautéed in sunflower oil, to which I added onions, garlic, tomato paste and herbs (plants!) and a bottle of Guiness (vegan!). Accompanying the Boeuf Carottes will be mashed potatoes (from locally grown potatoes) personally peeled, steamed and mashed with a little crème fraîche and an egg (also local, from contented pastured cows and hens) and a huge green salad of local watercress (picked over and washed by yours truly) mixed with rocket (aka arugula, from a bag, only because I love the stuff and have not found a local source) tossed with hazelnut oil, white balsamic vinegar and homemade croutons made from stale bread. The score is: animal ingredients = 3 (beef, crème fraîche and egg), plant ingredients = 13 (carrots, tomato paste, onion, garlic, sunflower oil, Guiness, potatoes, watercress, arugula, hazelnut oil, vinegar, croutons and red wine)…we have a clear winner. My meal consists of “mostly plants”.

What is ethical about this omnivorous meal? Well, the animal ingredients are pastured and local, bought at the farmers market directly from the producers. Many of the vegetable ingredients are also local: the carrots, potatoes, onions, garlic and watercress. The croutons are from bread I buy at the corner bakery and are a super way of using up stale bread. I have tried to minimize my consumption of processed foods from industrial agriculture (no vegan Pop-Tarts for me!). I have tried to maximize the use local, fresh and seasonal ingredients (no exotic, imported superfoods or off-season fruits and vegetables from far-away climes).

From the development of early agriculture humans and domesticated animals have created an obligate symbiotic relationship. Humans raised the animals as a food source and the animals turned to humans for their sustenance as well. I think that both omnivores and vegans can agree that animals are sentient beings and that they do not want to experience pain and suffering. But I also think that they will also agree that there are cognitive differences between non-human animals and human animals. So when I hear a vegan state that, “Animals live in the present,” and then in the next breath assert that, “The pig was anticipating slaughter,” there is, in my opinion, significant dissonance in these statements and although I would agree with the former statement, I think the latter shows clear evidence of anthropomorphism. 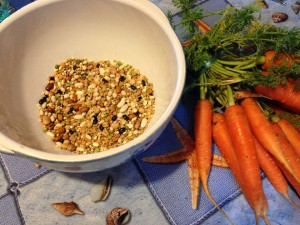 My concern is with eating for long-term sustainability. Accordingly, I favor systems that call for integration of traditional animal agriculture (note: by traditional I mean practices with a long history and not at all modern, “conventional”, industrial animal farming) with traditional plant agriculture. Modern industrial agriculture is a very recent invention, fueled by profit motives. The future of food lies in the wisdom of the past.

[*] Am I the only person who interprets “Rules” in title of this book as the opposite of “sucks”, as in in “Real food is wonderful but edible food-like processed substances suck?”

So well written. Thanks.

A thank you from us that are not so eloquent with thoughts. You’re time and passions are not wasted on deaf ears.

FYI – Guinness is not vegan, at least not until the end of 2016 (according to news articles) 🙂